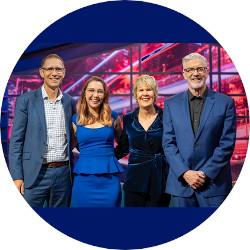 Age-related issues have flared at the ABC, as the broadcaster battles ageism at the same time as suffering a slump in youth audiences.

Former Radio National star Fran Kelly’s new Friday night TV talk show, Frankly, drew criticism from some in the media, principally because of the age of the presenter.

The culture reporter for the Channel Nine newspapers, Thomas Mitchell, wrote that the show should have been presented by a “20-something comedian.”

What about an up-and-coming YouTuber who might go on to greatness? Dare I say it? Maybe someone at ABC could log on to TikTok and unearth Australia’s next great TV talent.

Fran Kelly‘s new talk show reminds us that ABC TV programming is depressingly risk-averse, seemingly built on the assumption that people will eventually get old and tune in.

The reaction from the ABC was as strident as it was fierce. Board Chair Ita Buttrose lead the charge. She told The Australian:

Given the Nine criticism of Fran’s appointment, does that mean Karl Stefanovic will be consigned to the media scrap heap when he turns 60?

There is a mainstream acceptance of the idea that when people reach a certain age they are past their use-by date and should be carted off — that their time is up, they should vacate the space. It is, of course, at odds with contemporary thinking on how modern workplaces should operate, and it is steeped in problematic stereotypes.

The ABC should absolutely be platforming younger people in key roles, but that doesn't mean older people should be carted out on the basis of age. It's not a zero-sum game.

How often do we see women in their 60s on prime time TV? Rarely.

What struck me about the many column inches devoted to all this was the complete absence of any gendered analysis. Older men are a mainstay of our TV screens but women over 50 become culturally invisible.

At the same time, the ABC’s Triple-J youth radio network has suffered a dramatic decline in its audience.

Ratings for the network have slumped so rapidly that only about half as many young people are listening than when compared to this time last year.

READ A REPORT ABOUT TRIPLE-J’S AUDIENCE

In a thoughtful and comprehensive piece for The Guardian, Shaad D’Souza analyses the complicated nature of the audience’s relationship with Triple-J and comes up with a number of conclusions about why the audience is decreasing.

Triple J’s ratings predicament could be a reflection of its own success: Gen X and millennials are simply refusing to stop listening, which may be creating a perception that Triple J is for an older generation. — Shaad D’Souza

He says that technical and cultural changes in the way young people are getting their music, as well as a possibly too consistent reliance on a garage band “sound” at Triple-J, might also be to blame.