Albo — an ABC speech for the ages 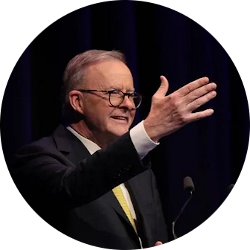 When ABC luminaries gathered at the broadcaster’s Sydney headquarters recently, little could they have known that they were about to hear what may have been the most pro-ABC speech ever given by a Prime Minister.

In a stark contrast to his predecessor, Anthony Albanese was effusive with praise for the public broadcaster.

It was a speech for the ages, and served to illustrate that under an Albanese government, the ABC will enjoy immense support.

READ THE ENTIRE SPEECH BY THE PM

In front of a stellar gathering of ABC celebrities past and present, the Prime Minister opened by poetically underlining the ABC’s importance to the nation.

Through nine decades, the ABC has brought us closer together as a nation.
You’ve added to our identity.
You’ve added to our voice.
You’ve brought us laughter and tears.
You’ve exposed hard truths and celebrated triumphs.
You’ve brought sunshine into dark corners.
You’ve sought out the bright moments in order to share the light.
As one of the mainstays of Australian life, the ABC has woven so many great strands into the fabric of our nation.

He highlighted the importance of ABC News and current affairs shows from This Day Tonight to Four Corners, 7.30, and especially, the ground-breaking Lateline, which was axed by former News Director Gaven Morris, but about which the Prime Minister pointedly said: “…which I still miss, by the way.”

Not everyone can shine a light so brightly that it burns away the darkness.
Not everyone can report a truth that changes the course of events.
And certainly not everyone is still willing to devote the time and the resources that make such an essential public service possible.
The ABC does. Why? Because it matters. Truth matters. Accountability matters.
A strong ABC is an insurance policy against the misinformation and disinformation chipping away at what we hold dear.
Amid the rising tide of social media, the ABC is a beacon of trust.

In the run-up to the last federal election, ABC Friends Victoria compiled a list of positive and otherwise interesting quotes from notable people about the ABC — many of which were spoken by Prime Ministers.

READ OUR ABC QUOTES FOR THE AGES

And as a result of this 90th anniversary speech, Anthony Albanese certainly earned his place in history’s page.

He continued by praising the ABC for its “invaluable” work during the pandemic and “crucial” role in saving lives during bushfires and floods.

There have been moments when you’ve been the difference between life and death. Ponder that. There are people still alive right now because of the ABC.

And he reminded anyone who thinks the ABC only caters for “latte-sipping elites” about its world-leading commitment to rural and regional Australia.

The Prime Minister acknowledged the ABC’s role in promoting and fostering Australian music and other arts, and its inclusion of minority groups.

But it was toward the end of his speech that Anthony Albanese effectively opened the doors to allow fresh air to blow through the cavernous Ultimo foyer:

A government that chooses to attack a public broadcaster does so motivated by either ideology or fear – or a toxic cocktail of the two.
No government should fear the ABC – unless it fears the truth.
A government of integrity and transparency should welcome the accountability that a strong, properly resourced public broadcaster brings.
There is little that is so at odds with who we are than an ideology that demands a tame public broadcaster, debased to the status of government mouthpiece.

Let us all hope that the PM maintains his love of our ABC, even when it (as will no doubt be the case) it finds the need to hold his own government to account.