ABC to benefit from demise of right wing think tanks? 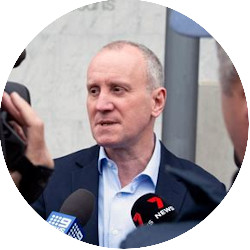 The commercial world deserts the IPA and other neoliberal "think tanks"

John Roskam, recently resigned director of the IPA, has lamented this week that: "Not one of the ASX 100 companies supports the IPA".

For an organisation that was created by business, for business, that’s bad news indeed.

The IPA (Institute of Public Affairs) has led the attacks on the ABC for many years, broadcasting loudly and often that: "The ABC is unremittingly biased", "The ABC is beyond reform" and "The ABC must be privatised".

IPA researchers and associates have had a high media presence and have appeared regularly as guests on both public and commercial radio and television, including the ABC, in Australia. IPA staff also write regular columns for Australian newspapers and online media, and its views have been vigorously supported by Murdoch’s media outlets.

The IPA has also had very close ongoing links with the Liberal Party, and in 2020, political commentators noted that the Liberal Party Prime Minister, Treasurer, Finance Minister, another 8 ministers, the Speaker of the House and additional Liberal backbenchers were all IPA members. In fact, the IPA actually launched the careers of a host of conservative politicians including federal MPs James Paterson and Tim Wilson and Victorian MP Louise Staley.

Thankfully that extensive list has been somewhat reduced both in number and influence by more recent election results.

On February 27 2020 the IPA released its "poll", claiming that "Only 32% of Australians believe the ABC represents the views of ordinary Australians". This one-question, leading question skewed "poll" was publicly torn apart on Media Watch, and subsequently totally exposed by the ABC Friends-commissioned 2020 Roy Morgan research papers that detailed enormous support for the public broadcaster across the country and positioned the ABC as the number one media channel accessed by Australians on TV, radio and on the web.

An excellent Mike Seccombe article in this week’s The Saturday Paper, "Exclusive: IPA has lost all funding from ASX 100", documents the decline in these right wing think tanks across the board, reflecting their lack of fresh ideas and relevancy.

As the article states -

The fact that corporate Australia now has largely abandoned the IPA – although the Murdochs, whose business is listed offshore, are still supporters, as is mining magnate Gina Rinehart, whose interests are held privately – may be the clearest indication of the declining influence of not just the IPA but right-wing think tanks in general.

Well, that is good news, not just for the ABC, which has been under constant attacks and pushes for privatisation from the IPA, Sydney Institute, Institute for Progress, Australian Taxpayers Alliance, and other right wing think tanks, but for Australian democracy and equality in general.

You can read the full article here