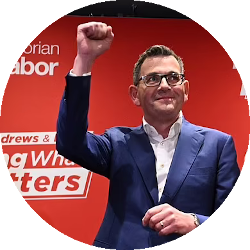 The apparent ineffectiveness of the Murdoch media’s negative coverage of the Andrews Government pre-election has become part of post-election analysis, with one long-time media observer arguing that trust in the ABC may be a factor in diluting the potency of “any campaigning by News Corp outlets”.

Former journalist, academic and co-author of Who Needs the ABC, Matthew Ricketson wrote in The Guardian that while the Murdoch-owned newspapers, news website and pay-tv outlet, Sky News Australia, “loom large in the media landscape”, so too does the ABC.

The ABC’s Annual Report, tabled in Federal Parliament in September, showed that the ABC’s national audience reach across television, radio and online is now estimated to be around 70%.

Ricketson said that while the ABC has its critics, it is required by its Charter to be accurate and impartial in its news and current affairs services. And that this has a flow-on effect in being trusted by Australian news consumers.

“In other words, any campaigning by News Corp outlets seems to be offset or diluted by the ABC’s coverage,” he said.

Former Victorian Premier Steve Bracks said on election night that there had been 150 negative items across Murdoch-owned outlets in the lead up to election day, while former Prime Minister Kevin Rudd accused News Corporation of “dog-whistling to conspiracy theorists” after repeated coverage of Premier Daniel Andrews’ 2021 fall and a 2013 car crash involving his wife.

Ricketson said voters had “ignored or rejected” the Murdoch campaigns run before the Victorian and Federal elections.

He said while there are other factors – including the proliferation of news sources through the internet – it was becoming clearer that “from the resounding message the national and Victorian electors have given to their politicians this year that they are most comfortable with a more centrist government. News Corp outlets have likely alienated them by moving further to the right”.

In 2018, the ABC was found to be the most trusted news source of any in Australia by the University of Canberra, which measures audience perceptions of trust in its annual Digital News Report.

Research commissioned by ABC Friends has also consistently shown similar results, with 77% of respondents saying they rely on the ABC for accurate information.