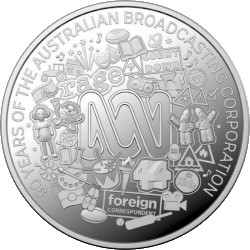 The Royal Australian Mint has produced a commemorative $1 coin and a 20-cent piece marking ninety years of the Australian Broadcasting Corporation — and it has proved very popular!

The collector coins feature iconic programs and characters that have defined the ABC since it first went to air on 1 July 1932.

I’d like to commend the Mint for producing two beautifully crafted coins that capture the spirit of the ABC over our 90 years.

This is one of the last events of the year marking our 90th birthday and I’d like to take the opportunity to thank all those Australians who have shared their memories with us in programs like ABC TV’s interview series The ABC of..., ABC Radio’s Your ABC Story and ABC News’ Your Australian Story.

The ABC has played a big part in so many people’s lives over the past 90 years and continues to do so today. We’ve enjoyed bringing these special moments to our audiences this year, as much as they have enjoyed watching, reading and listening to them. These two coins are wonderful collectors’ items and provide the perfect bookend to our 90th celebrations.

The Mint is delighted to be part of the celebration of the ABC’s 90th Anniversary – an organisation recognised as the home of Australian conversations, culture and stories.

The coin design represents the ABC’s special and far-reaching connection with Australia and Australians as it has grown and evolved over 90 Years. Like a family photo, the ABC logo is featured predominantly on the coin, surrounded by icons that showcase the rich history of the ABC, and its evolution into an iconic part of the Australian media landscape.

The ABC coins were designed by Aleksandra Stokic and celebrate the many facets of the ABC with pictograms surrounding the iconic lissajous logo.

The $1 coin is a ½ oz fine silver proof coin and comes in its own commemorative box. The 20-cent piece is an uncirculated coin. Both are legal tender but produced as gifts or souvenirs or as pieces for collections.

If you want one of these collectible coins, happy hunting! They quickly sold out but can be found on sites like Etsy and eBay.