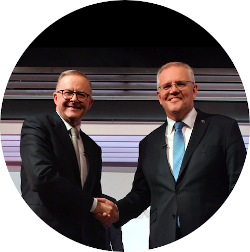 In one of his final acts as ABC Editorial Director, Craig McMurtrie fronted a parliamentary inquiry last week, pushing for legislation to enshrine election debates on the public broadcaster.

Mr. McMurtrie, who, after a long and distinguished career at ABC News, recently announced his retirement, was advocating for an ABC submission to the committee which calls for new laws.

The full submission is included below.

The move followed the disastrous situation earlier this year, when then Prime Minister Scott Morrison refused to take part in any debate hosted by the ABC.

Channel Seven’s debate was broadcast late at night after Big Brother; there was a debate on Sky, which is a subscriber service with low ratings, and a third on Channel Nine proved disastrous, with a moderator who lost control.

The Guardian, which along with the Channel Nine newspapers appeared to have been sent the submission in advance of the hearing, quoted the document:

Despite the ABC attracting a large national audience across all platforms with Australia’s largest broadcast footprint with market research showing the ABC as the most trusted media brand in Australia, as well as its statutory obligations to cover Parliament, no debate was hosted by the ABC.

LISTEN TO A SATURDAY PAPER PODCAST ABOUT MORRISON’S SNUB

The submission calls for a public process to be established, where the Communications Department would appoint a panel of commissioners which would include former politicians and media company representatives.

The commission’s task would be to organise three debates, decide on the rules and format, chose broadcasters and the time and date of the debates, including at least one hosted by the ABC.

The Parliamentary Joint Standing Committee on Electoral Matters was asked by the government, on the 5th of August this year, to inquire into and report on all aspects of the conduct of the 2022 federal election.

The inquiry is now closed and is formulating its recommendations.