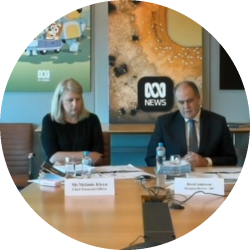 Who could have guessed? The Liberal Party has doubled down on last fortnight’s campaign launch to, yet again, make a determined effort at destroying the public’s trust in the ABC.

The trio of Liberal senators at times seemed desperate to find something, anything, any mud at all, that could be flung at the ABC and stick, and nothing was too small or irrelevant to throw, be it questioning Ita’s travel costs, asserting that Patricia Karvelas’ private admiration for Linda Burney was publicly promoting the Labor Party, or claiming that Dr Swan shouldn’t be giving his medical opinion on Covid!

Senator Henderson for over ten minutes badgered MD Anderson about Dt Swan’s suggestion that there might be a Covid link with the deaths of a Labor senator and a cricketing legend. In trying to expand that one issue (Swan has apologised for it since) into a broader condemnation of the doctor more generally, she several times referred to articles in the Daily Mail newspaper as her source of information in attacking the highly respected Swan. Reading word-by-word from the articles, Henderson clearly intended to severely undermine Swan’s credibility.

ABC MD David Anderson calmly refuted the attacks, expressed his full support for Dr Swan, and responded, “I note that you are reading from the Daily Mail and would advise caution around the reporting of the Daily Mail.” Nicely said David.

Henderson questioned a private tweet posted by reporter Patricia Karvelas on election night last May, with a photo of her standing with Labor’s Linda Burney. “This woman is a legend” said the tweet, “It looks like she will be the next Minister for Indigenous Affairs”. Ms Henderson amazingly tried to insist that this was an indication of bias and a promotion of Karvelas’ Labor loyalties. Anderson demurred, at which point Henderson chuckled to herself then exclaimed “Mr Anderson, are you serious! The ABC’s standards have slipped, this is why your social media policy is so flawed!”

Senator McGrath continued his attacks on Louise Milligan. The Liberal Party apparently hasn’t forgiven her for her exposés of their bad behaviour on 4 Corners.

McGrath then strangely embarked on a series of vague and trivial questions about Ita Buttrose’s behaviour in her role as chair of the ABC Board, that seemed to imply, without any evidence whatsoever, that there was something “wrong” with how she conducted herself. “Why was Ita allowed to do work outside the ABC without permission from the Board?” he asked. “Were Ita’s claimed travel expenses always for ABC related travel?”

Anderson explained, quite patiently, that board positions, including the Chair, are all part-time roles, so those occupying the positions can take on other appointments. The only requirement is to comply with the PGPA guidelines on potential conflicts in doing so. And yes, her travel expenses were all genuine.

McGrath finished his questioning with the rather empty threat “I reserve my right to refer the ABC to the Privileges Committee!” For what, wasn’t clear.

Meanwhile, on Australia Story this week, Ita Buttrose reflected on a life in the media spotlight and how six decades as a pioneering female journalist and magazine editor helped prepare her for one of the ABC’s toughest jobs. “I see what my whole career has been about. It’s been leading me to this job because I thought everything I’ve ever done in my career has equipped me to be the chair of the ABC,” she said. And, as probably the only ABC chair to have a lifetime of media experience, she makes a good point!

Back to Senate Estimates, Henderson and McGrath were joined by the well-known anti-ABC Senator Gerard Rennick, to add further trivial criticisms of ABC staff and management supervision of them. “You don’t get punished in the ABC for anything do you!” he angrily claimed. Apparently Rennick wasn’t happy that Professor Bowtell had been invited onto the ABC to discuss the Covid pandemic. “He’s not an expert on infectious diseases” Rennick said. Well, no, he isn’t, but he is an Adjunct Professor at the Kirby Institute for Infection and Immunity, UNSW, and a strategic policy adviser, with particular interest in national and international health policy structures and reform. Surely that’s relevant expertise.

He also wasn’t happy with the ABC’s reporting of the earth’s rising temperature and seemed to think the ABC was misleading the public by using “homogenised” data rather than “raw” data. “Why doesn’t the ABC explain the difference between raw and homogenised temperature data?” Well, having looked it up myself, I understand why they haven’t, it’s incredibly complicated! If readers want to look at this themselves here’s a link where it’s explained.

For those who aren’t aware, Senator Rennick has consistently voted to decrease ABC funding.

And late news: Senator Henderson, Shadow Minister for Communications, after all her petty demands that the most minute details of the ABC’s operations be clearly defined, referred to the ABC in a recent motion as the “Australian Broadcasting Commission”, a title that ceased to exist 39 years ago when its name was changed to the Australian Broadcasting Corporation. Thought Sarah would have caught up with that by now?

As we noted in the last newsletter, these seemingly coordinated attacks on the ABC by the Liberal Party, supported by the Murdoch press’ own on-going and relentless damning of the ABC, continue in the face of new research on media trustworthiness released last week.

The ABC retained its title as most trusted media brand in Australia, winning an inaugural “Roy Morgan Trusted Brand Award” in the process. 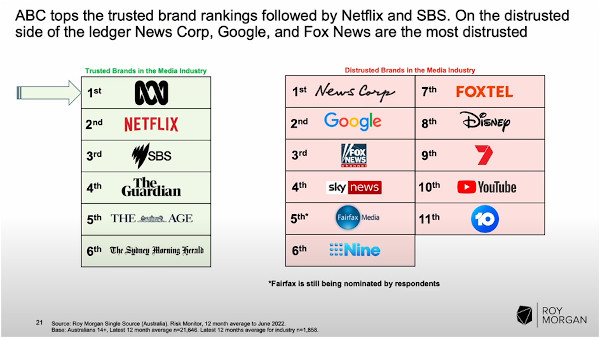 Read an article in The Saturday Paper on the subject